Darjeeling in Under 24 Hours 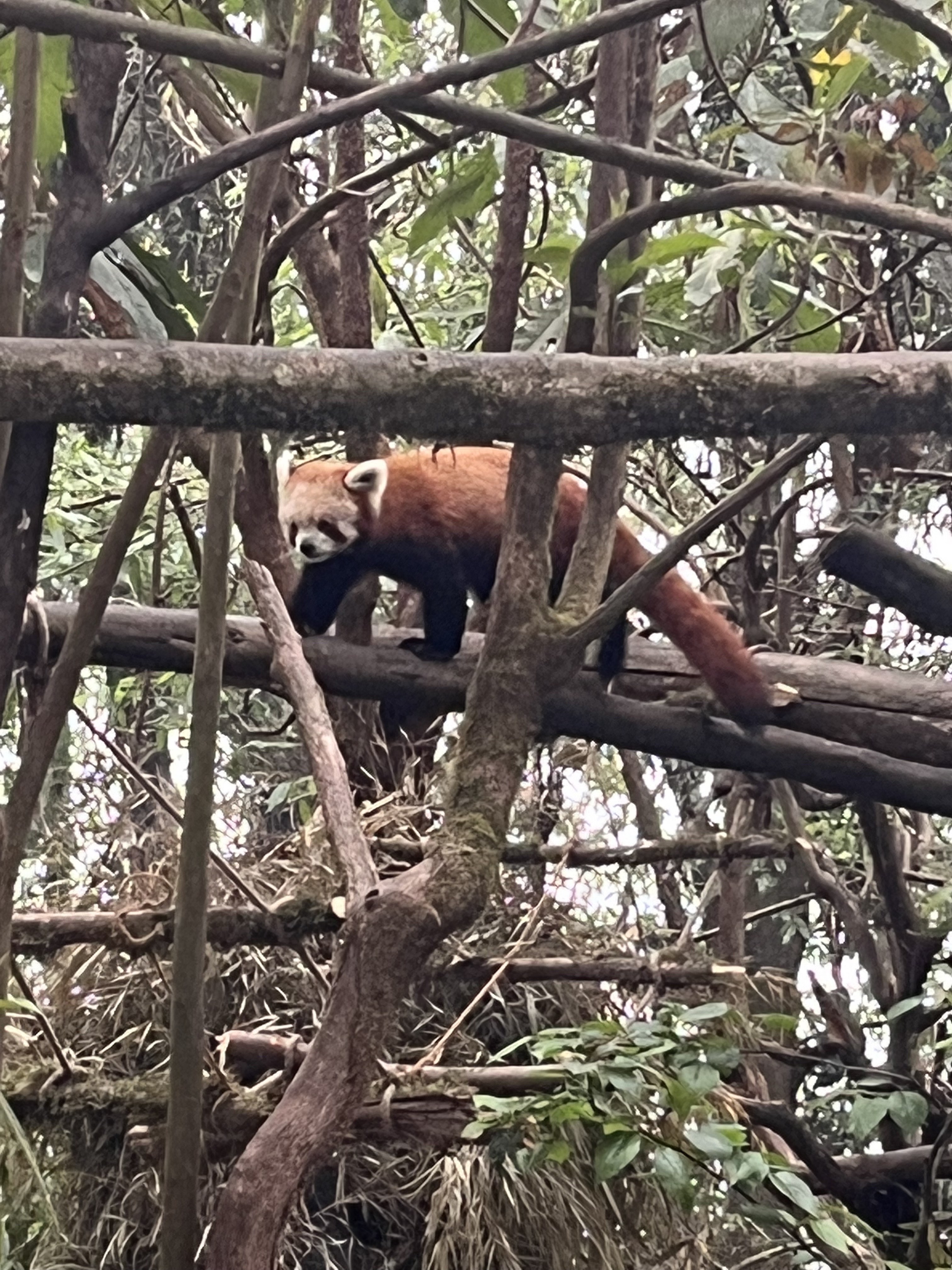 Travel is unpredictable — like the winding roads of the Indian Northeast, it twists and turns in ways that you least expect. Although the destination might be planned, there is no way to know how the journey will unfold.

I never really wanted to visit Darjeeling. The concept of a quaint “hill station” did not appeal to me. It seemed too tame as compared to the towering Himalayan peaks found in Ladakh and Sikkim. The over-representation of Darjeeling as a toy train-encircled tourist escape, as well as a boarding school town for privileged kids, also contributed to my disinterest. I wanted to see the “real India,” and somehow, Darjeeling didn’t fit into that idea.

I ended up in the hill station because it was an easy stop on the way from Bagdogra airport to Gangtok, the Sikkimese capital. “Why not stop over for a day?” Anunay, my boyfriend, asked. I agreed. In all, it would be less than a 24-hour detour.

Our flight from Delhi landed at 08:45 AM, and we were easily able to get a prepaid taxi from the airport for the approximately 3-hour drive to Darjeeling. No squabbling and no negotiations: just a prepaid booking and a government-endorsed receipt. Once we were in the vehicle, the road did not take long to start climbing upwards, and the fog shrouding the region made us feel like we were driving between clouds. 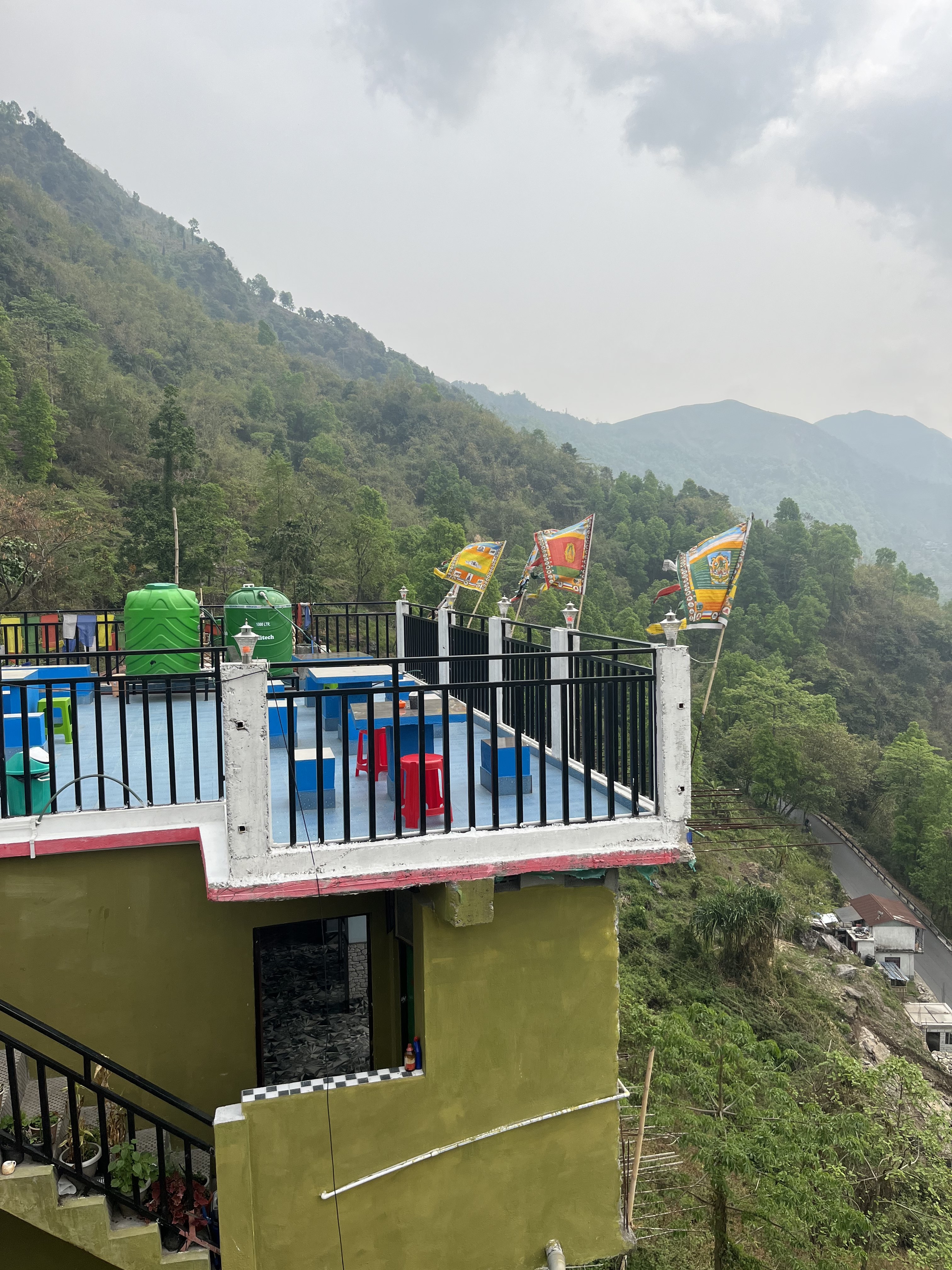 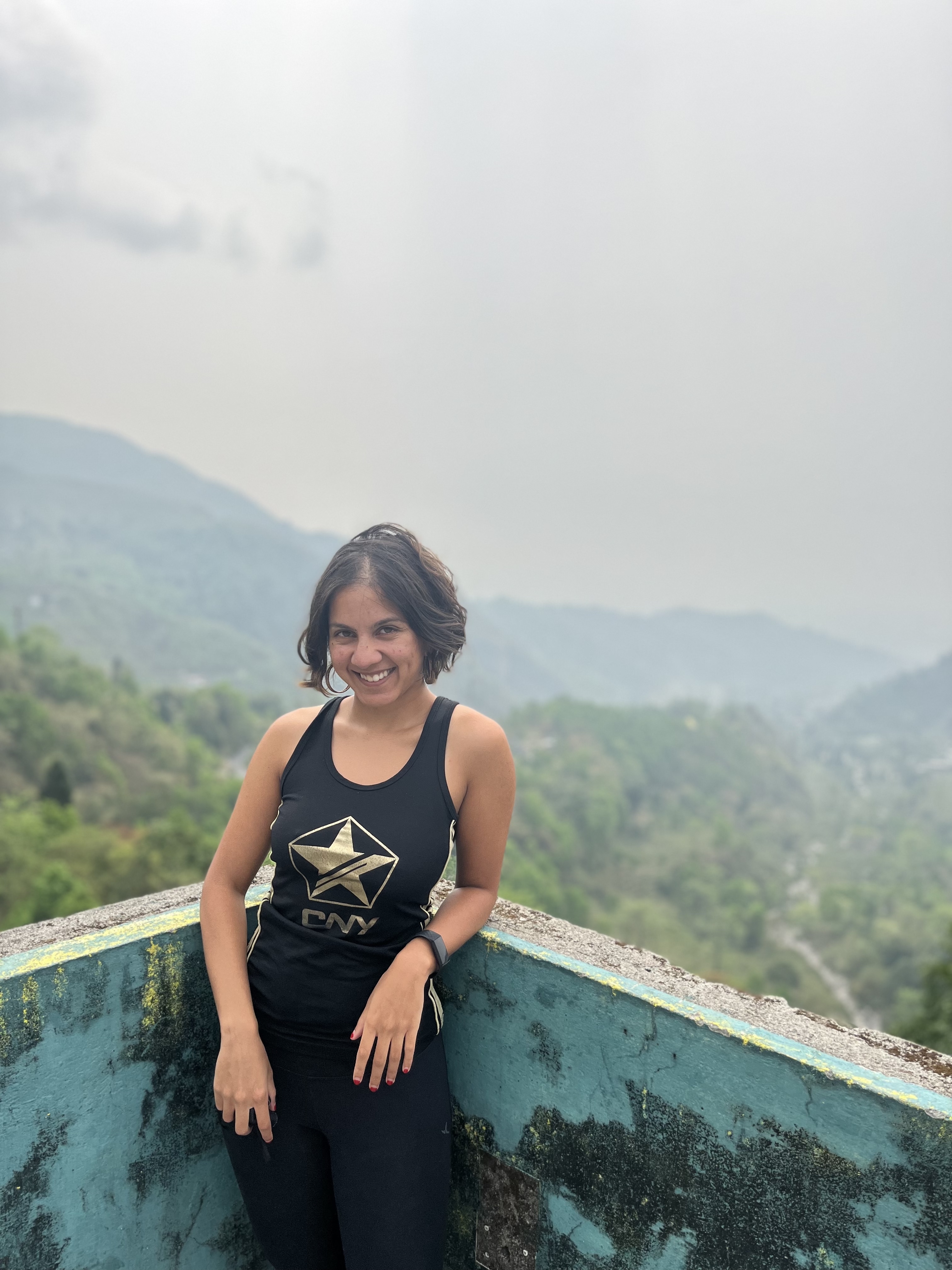 Our first stop on the way to Darjeeling from Bagdogra: foggy and yet so beautiful. The balmy weather reminded me of my home: Trou Aux Cerfs in Mauritius.

Along the drive, frequent signposts with references to Gorkhaland — mostly within the context of the Gorkhaland Territorial Administration — drew my attention. I had only vaguely heard of the term “Gorkha” before. I knew it was an ethnic community spread across Northeastern India and known for its brave soldiers, who had also fought for the British in multiple wars. I remembered the controversy that arose when these soldiers were initially refused the chance to settle in Britain and hold UK citizenship, despite having risked their lives fighting on behalf of the British (this was finally resolved in 2004). As we drove along, I learnt members of the Gorkha community want their own state: the Central government is amenable to the idea, though the West Bengal state government is not (as it would reduce the size, population and economy of the state and thus the power of its representatives). The Gorkhaland Territorial Administration is therefore a compromise: an autonomous district council for Kalimpong and Darjeeling, two northern regions of West Bengal that could not be more different from the state’s capital of Kolkata. Another taxi driver would later hint at the complex identity politics: Call a Gorkha from Darjeeling a Nepali, he said, and they will get offended at the alienation, because they feel strongly rooted in the region and want it to become a separate state they can call their own. Call a Sikkimese Gorkha a Nepali, however, and they will not mind, given that Nepali immigrants are legally recognised and catered to by the state of Sikkim. This perspective – on a multidimensional issue that cannot be reduced to a single viewpoint, one must not forget – was a valuable one to keep in mind as we began our travels across a region often described, simply and homogenously, as the “Northeast.” 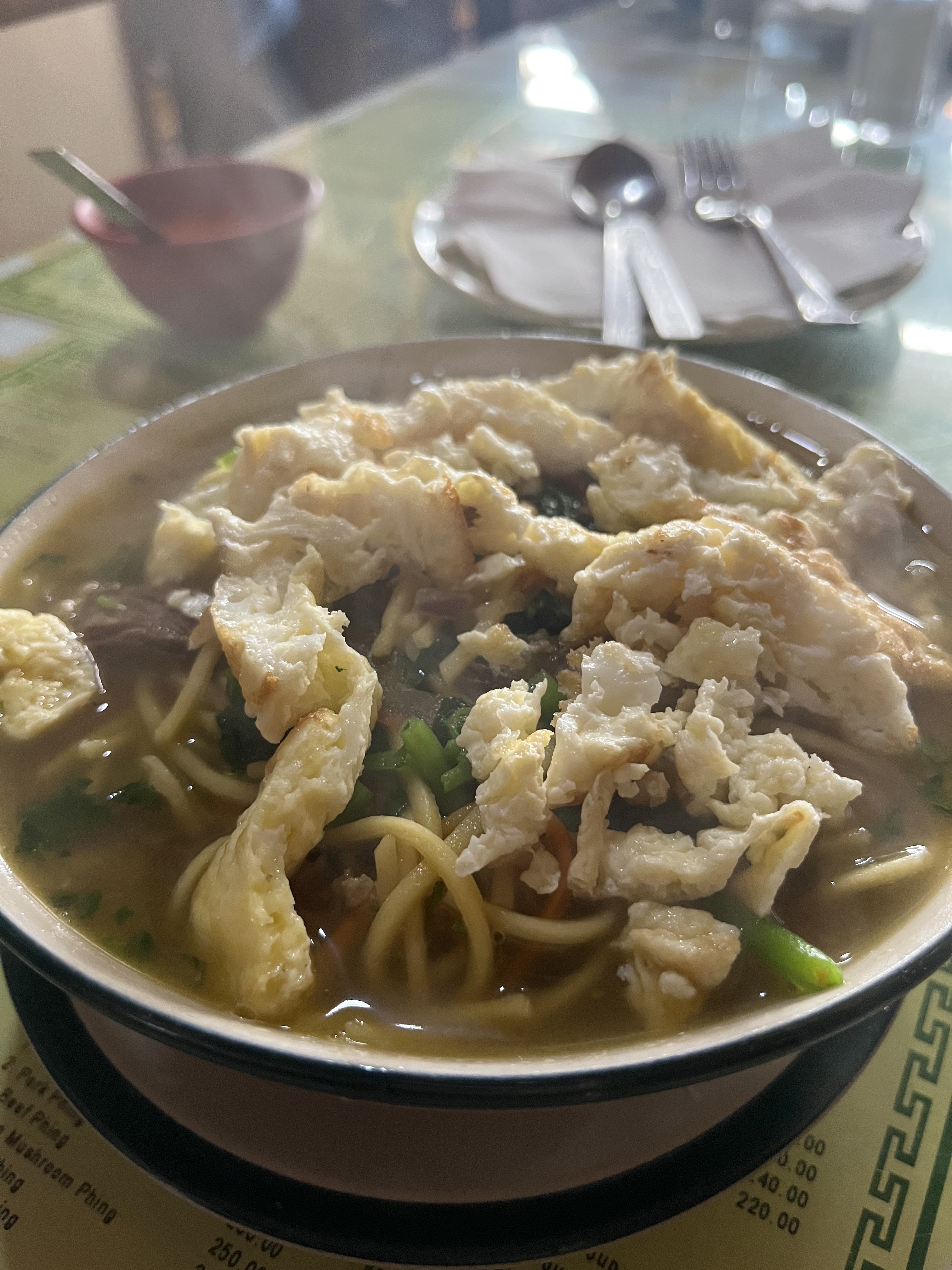 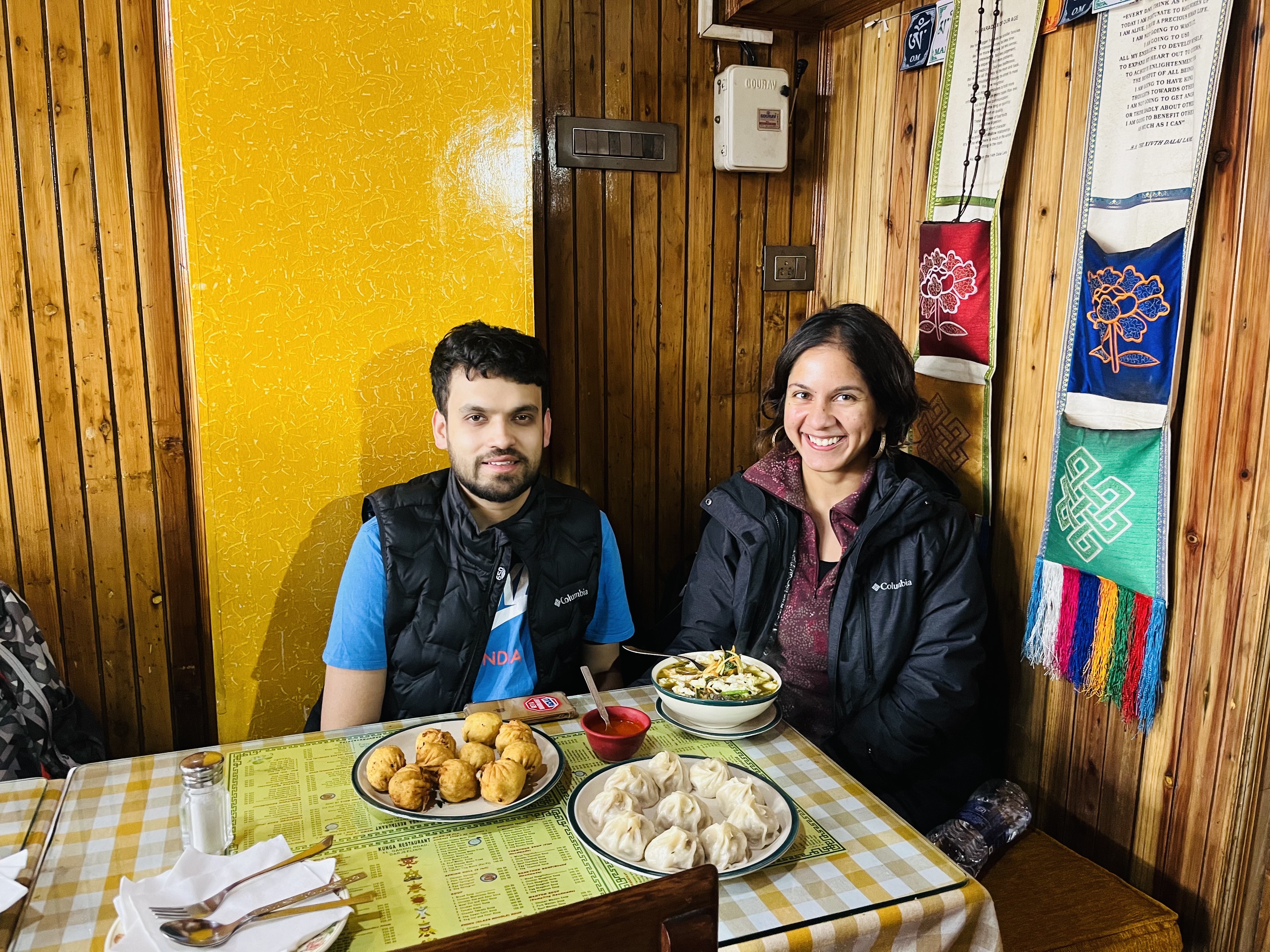 Our first stop in Darjeeling was Kunga restaurant, a hole-in-the-wall favourite for local cuisine: thukpa, wai-wai and momos. We had to wait for a table, and by the time we left, the queue outside had considerably lengthened. The momos were some of the best I have ever had (and that is saying something, given that they have been my favorite Indian food since 2017, and I seek them out pretty much whenever I can). Given that we were coming in from Delhi, the lower temperatures of Darjeeling came as a little shock to me, hence the three layers of clothing in the picture; Anunay took the change in his stride and was fine in a T-shirt.

As lunch ended, our intentions for the rest of the day bloomed. We were not interested in simply ticking off the most touristy things — tea gardens, toy train, gondola ride — given that we had very recently experienced most of these in other parts of the world. Instead, we decided to make use of the limited time by doing two things we were truly excited about. Galvanized by this resolve, we headed to the Himalayan Mountaineering Institute and Museum, and the Padmaja Naidu Himalayan Zoological Park, which were fortunately located in the same enclosure, a mere 10-minute drive away from our hotel. 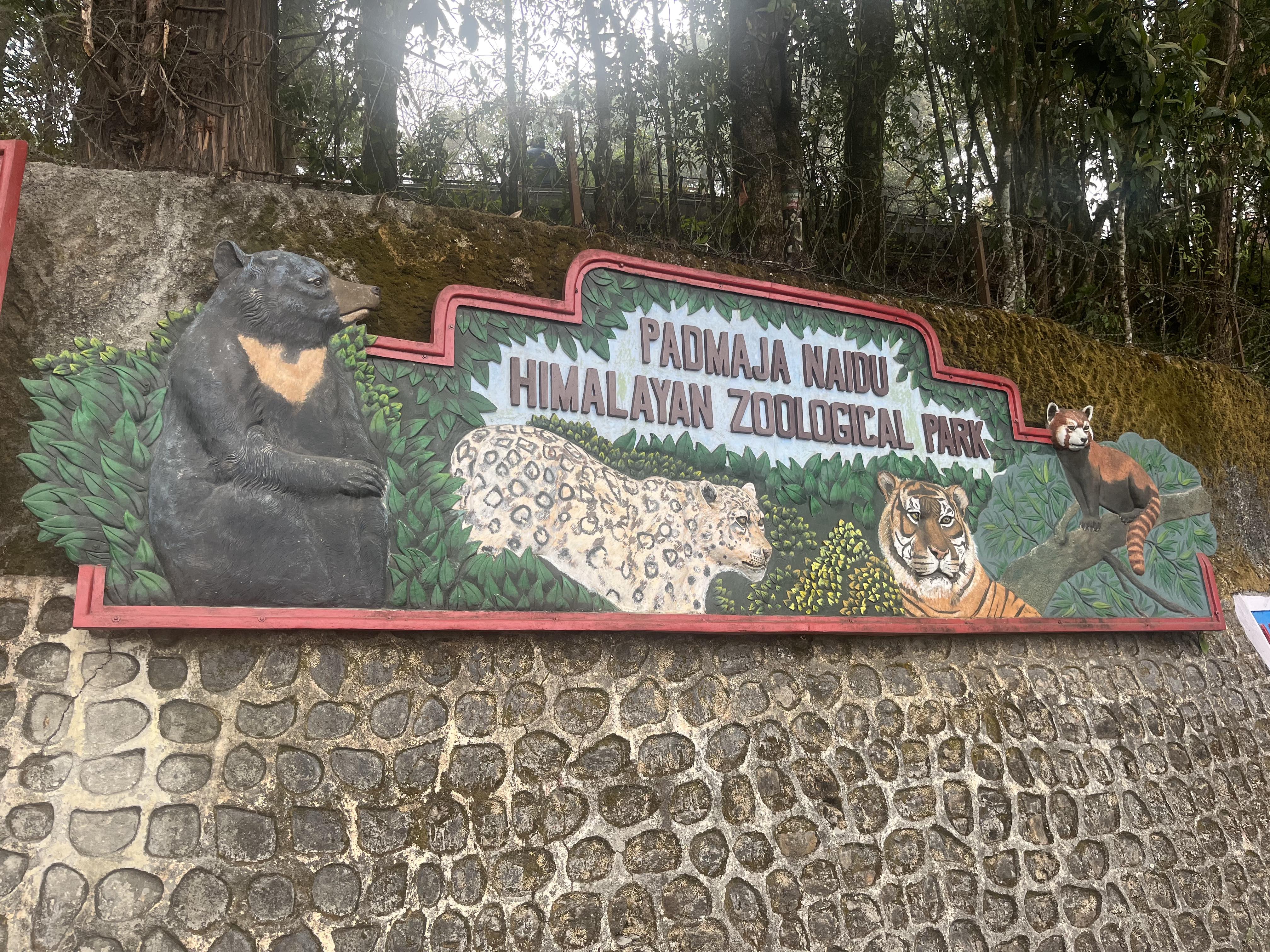 The Institute and Museum, inaugurated by Pandit Jawaharlal Nehru in December 1954, was a real treat for a lover of mountains. The heart of the exhibition was the very first ascent of Mount Everest, the tallest mountain in the world, in 1953 by Nepalese-Indian Sherpa Tenzing Norgay and Kiwi Edmund Hilary. To me, one of the most compelling parts of the exhibition was the display of the Tenzing Norgay’s equipment, a far cry from the sophisticated resources mountaineers today possess. Unfortunately, the museum does not allow photography, so I cannot reproduce them here; but the sight of that sleeping bag, porcelain mug and snow shoes will stay with me for a long time.

The scholar in me was also very interested in the geographical and historical dimensions of the exhibit pertaining to the Himalayas. There was a long reproduction of the subcontinental mountain chain that did not include national borders, but instead focused on the mountain peaks and rivers that sweep across Pakistan, India, the contested Kashmir Valley that lies between them, Bhutan, Tibet and Nepal. Faced with this alternative geography that foregrounded natural features rather than man-made boundaries, my mind wandered: How would things be different if people could approach the mountain chain as a geological whole, rather than fragmented peaks spread out across different national territories?

There was also an explanation of the colonial roots of the project of mapping and labelling the Himalayas, which was undertaken by the British during the 19th-century, as part of their investment in preventing competing expansions and unravelling the mysteries of the Tibetan Kingdom. The museum exhibit explains that project of creating a “grid survey of the whole Raj” was spearheaded by Sir George Everest, after whom Mount Everest was eventually named. As is often the case with colonial labels, this new and now globally accepted name erases traditional ones: The traditional Nepali name is Sagarmatha, meaning “Goddess of the Sky,” while the traditional Tibetan name is “Chomolungma or Tschoumon Lanckma, the Goddess mother of Earth”. 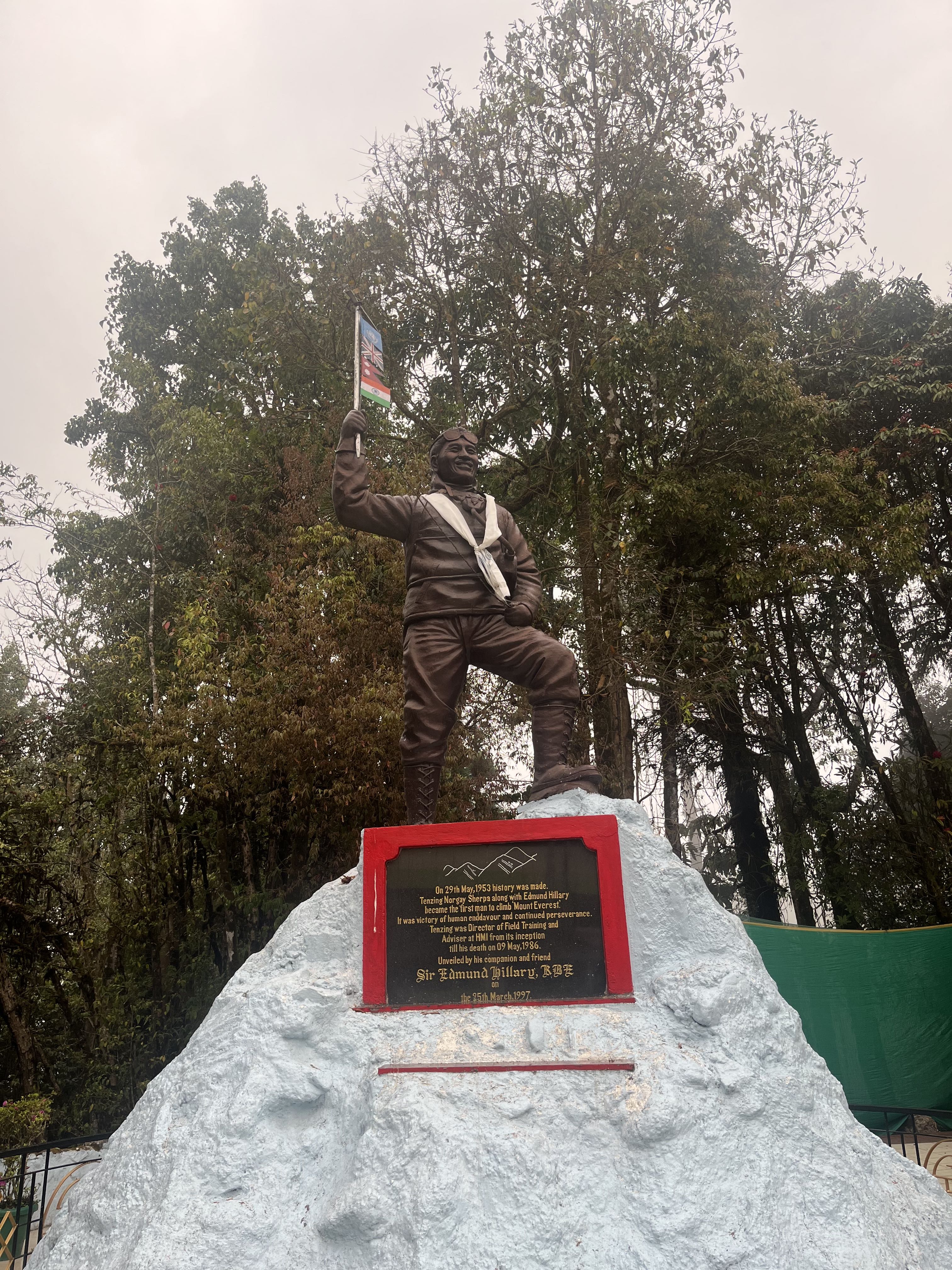 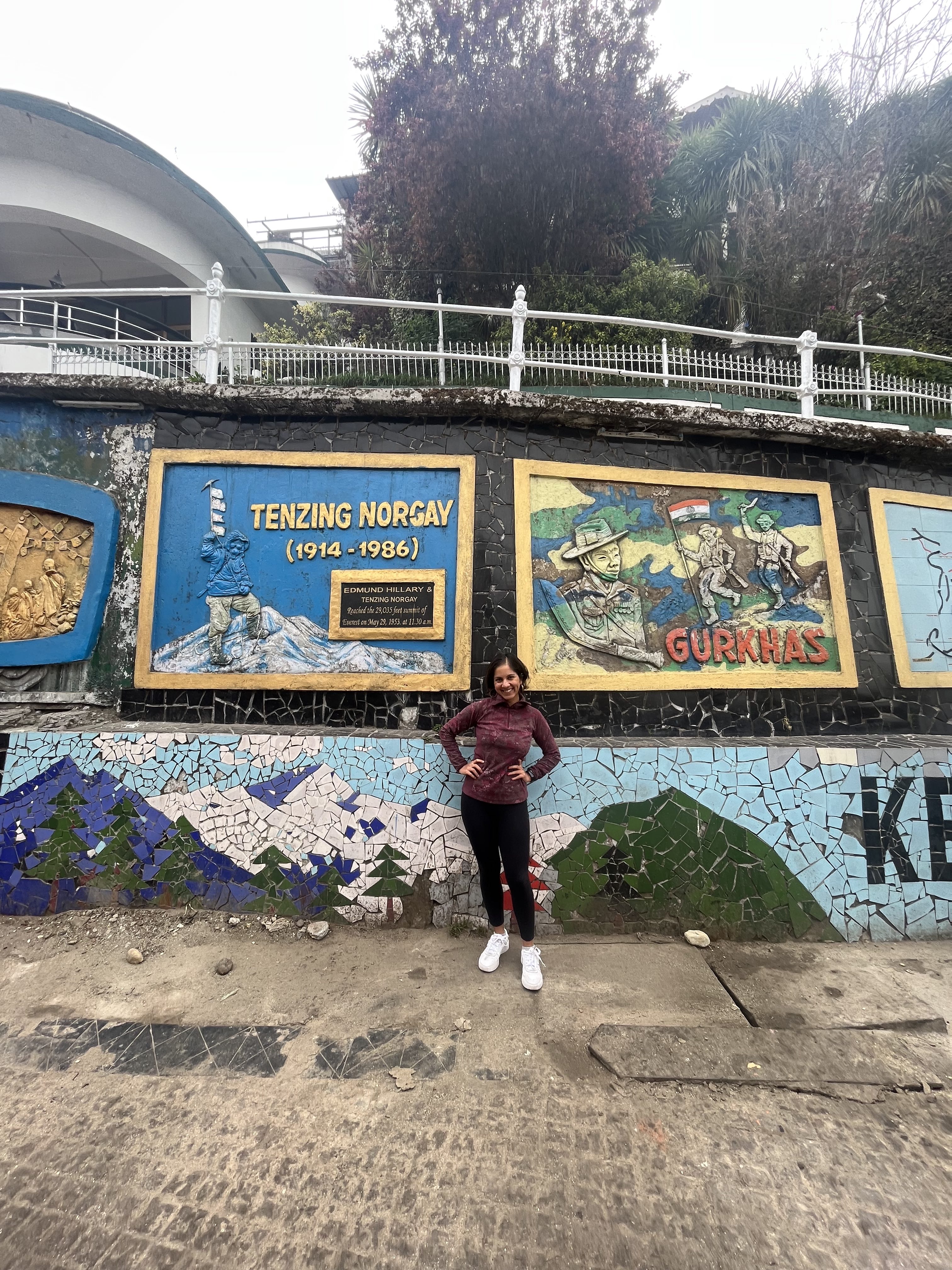 Tenzing Norgay is a celebrity in Darjeeling. Here is a statue of him outside the Himalayan Mountaineering Institute’s museum, and here is a portal of him on the famous Nehru Road in Darjeeling.

I had conflicting feelings about visiting the zoo. Given the cruelty inherent to the caging of animals, I do not visit zoos in general — I was around twelve the last time I did so. Instead, I generally seek out wildlife safari experiences (my last one was a tiger safari at Panna Tiger Reserve in Madhya Pradesh). This time, there was no alternative: given the time constrains on this journey, I would not be able to see Himalayan wildlife any other way.

The highlight of the visit was undoubtedly the red panda, the state animal of Sikkim. It is endemic to this Himalayan region. 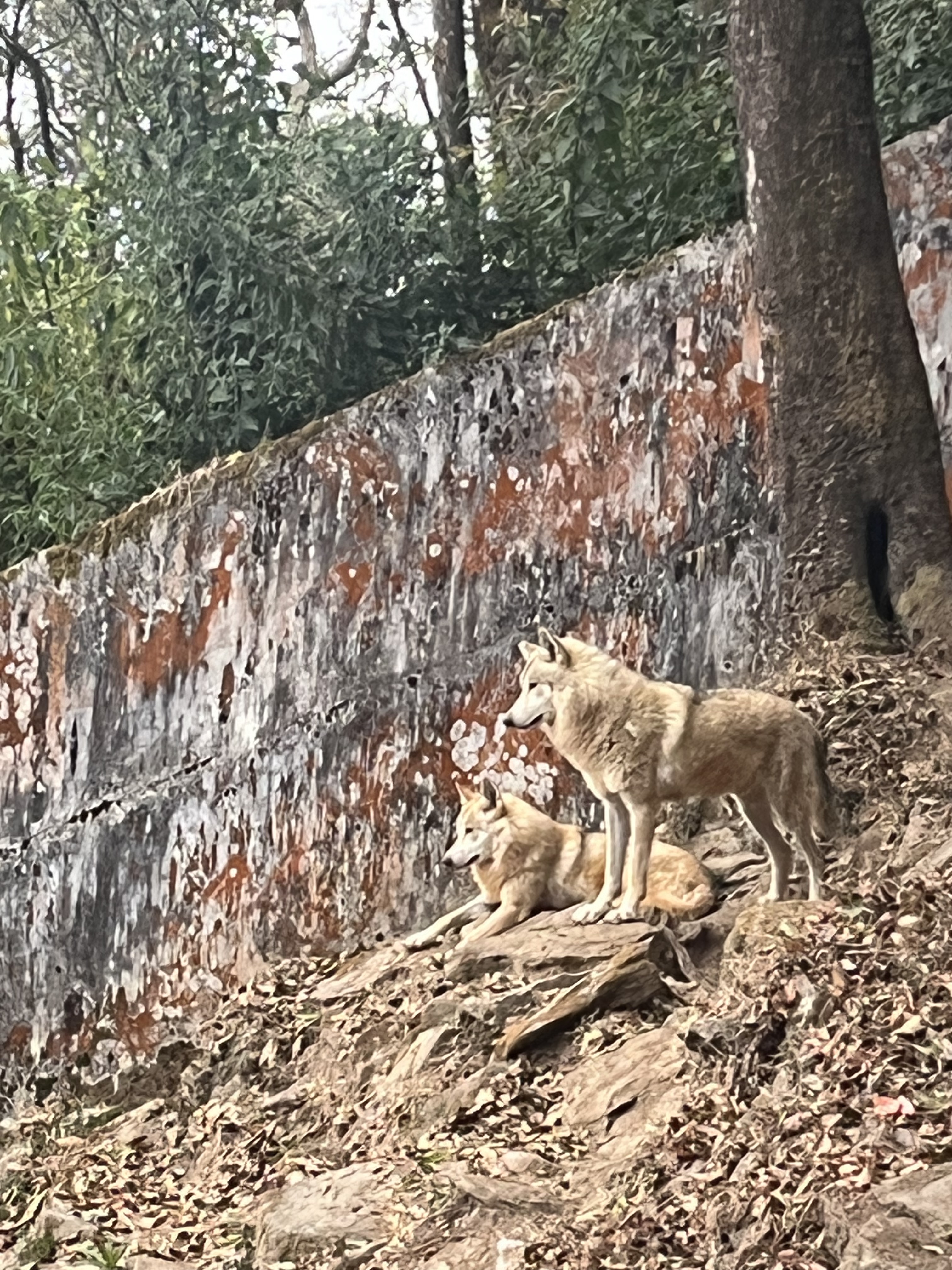 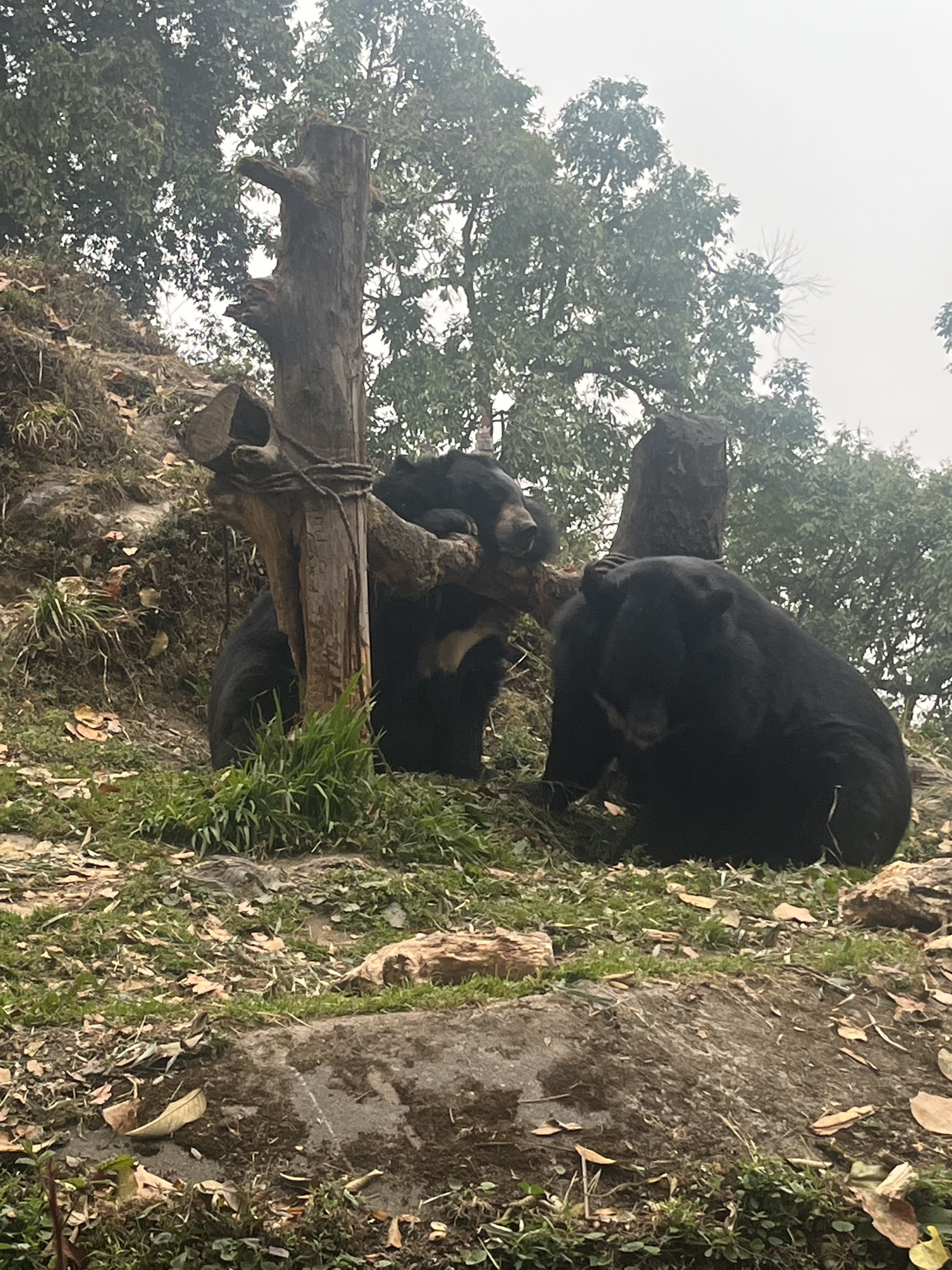 We saw the Himalayan wolf, which is still not recognised as a critically endangered species despite the fact that its numbers in the wild revolves around 350. This lack of classification seems to be due to the fact that the Himalayan wolf is lumped together with the Tibetan wolf, despite significant genetic differences. We also encountered black Himalayan bears, who were adorably nuzzling each other. 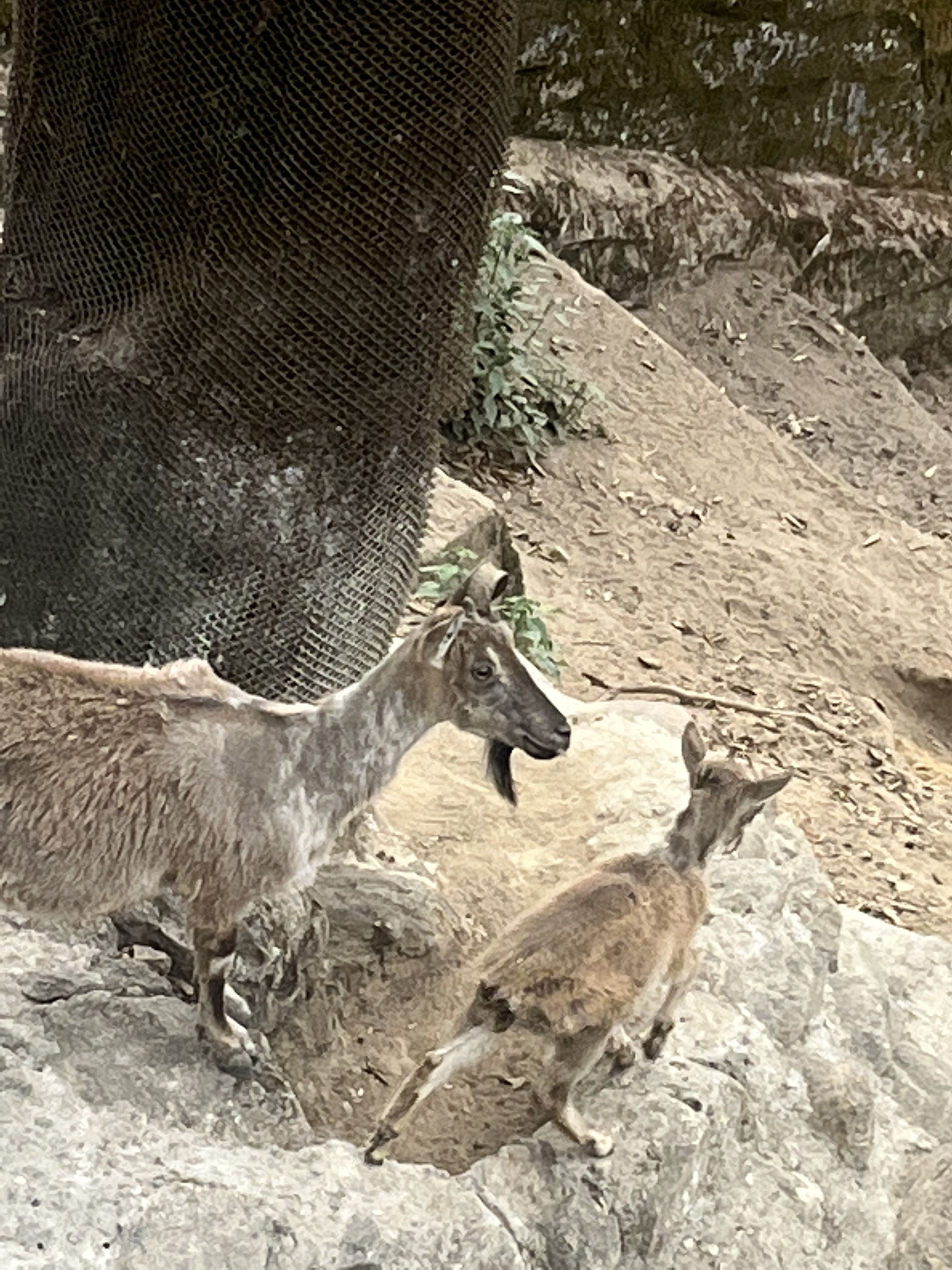 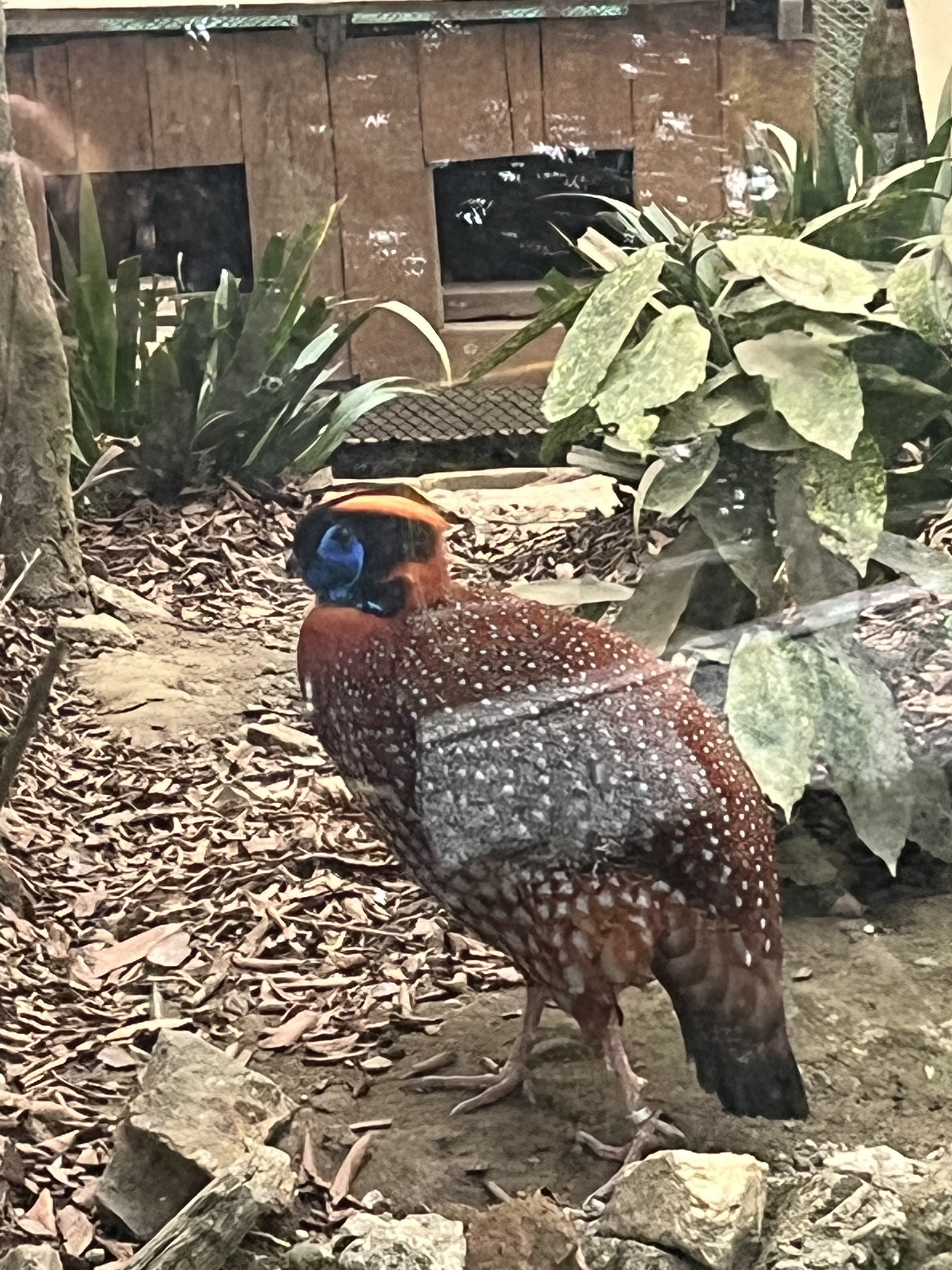 Additionally, we had the chance to see the Himalayan goral (which I had also previously seen during a three-day hike in Ladakh); a Himalayan tahr; Temminck’s Tragopan, “arguably one of the most beautiful of all the pheasants”; and the Markhor, which is the national animal of Pakistan. The latter two animals are represented above. The literary scholar/feminist in me was greatly rankled by the description of the male animal as having a “dignified and patriarchal appearance” — I spent a good five minutes ranting about it.

We were discouraged from either hiking or driving to Tiger Hill viewpoint, which is known for its breathtaking views of Kanchenjunga, by everyone we spoke to: the fog, they said, would not allow for any visibility. Looking around us, we knew this to be true. We therefore spent the rest of the day ambling around the city. The literary scholar in me was overjoyed to stumble upon two amazing bookshops, both of which boasted wonderful collections of local fiction and mountain literature. My two favorite ways of soaking in a place — travel and literature — were both within arm’s reach. 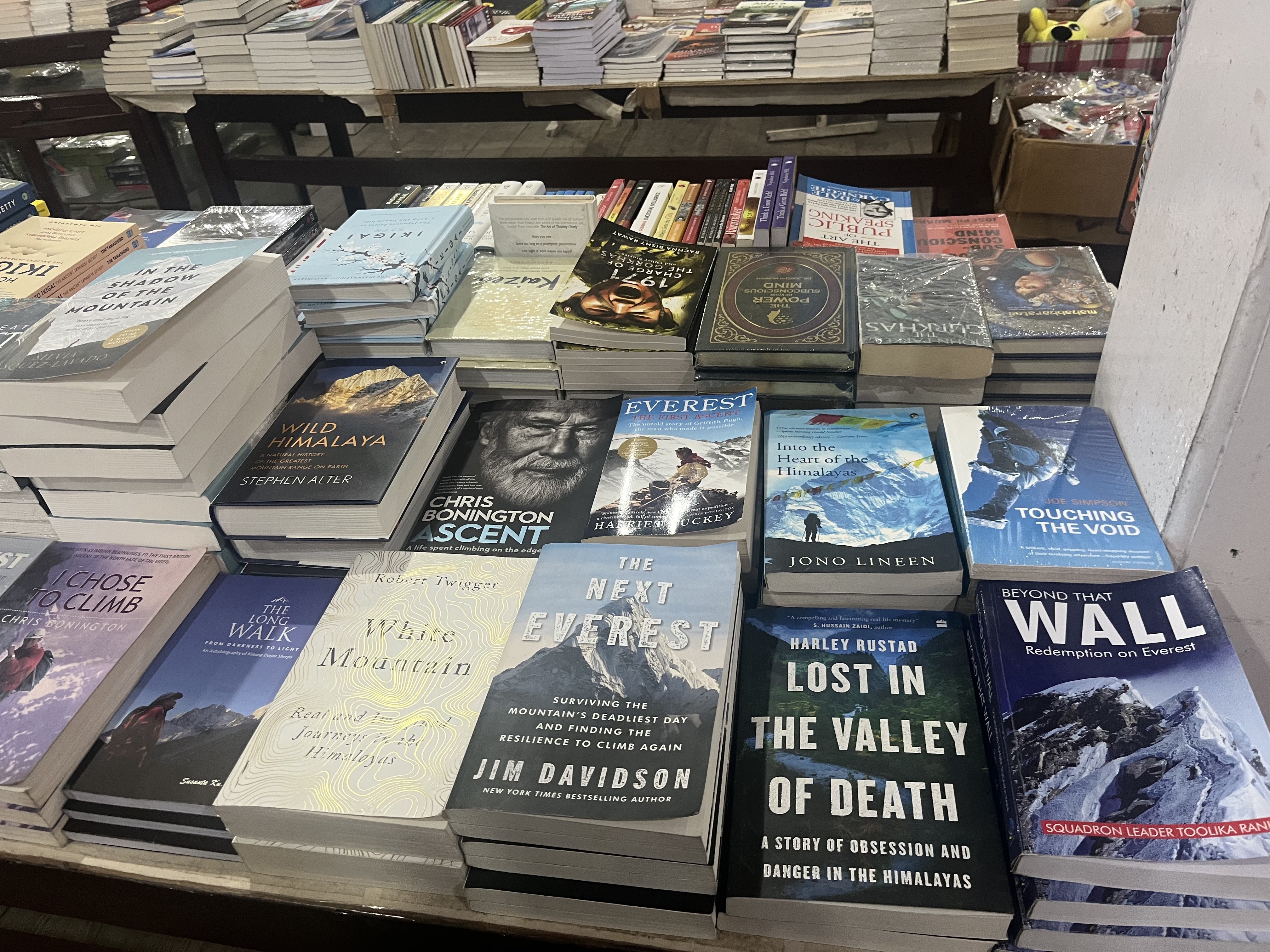 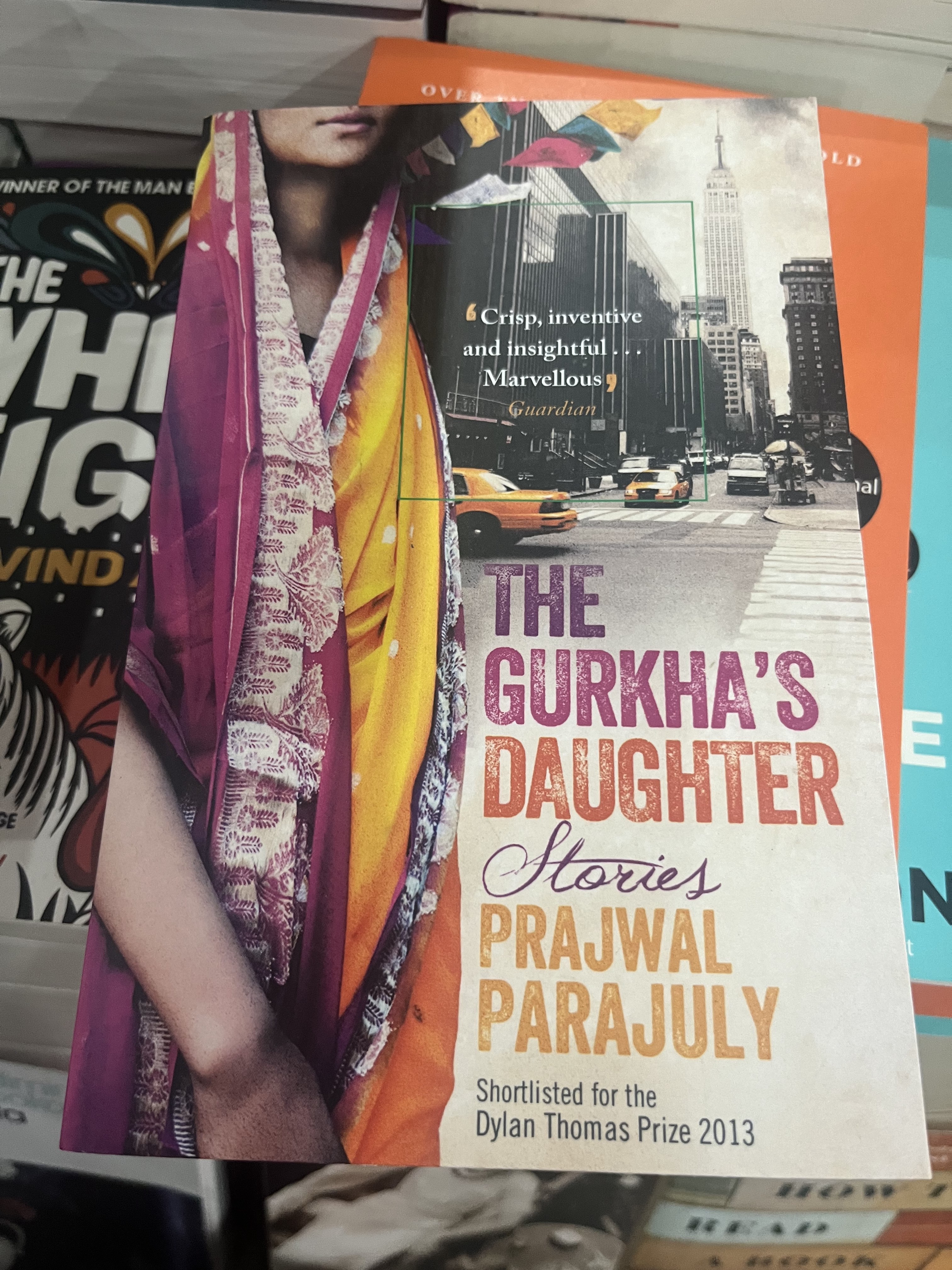 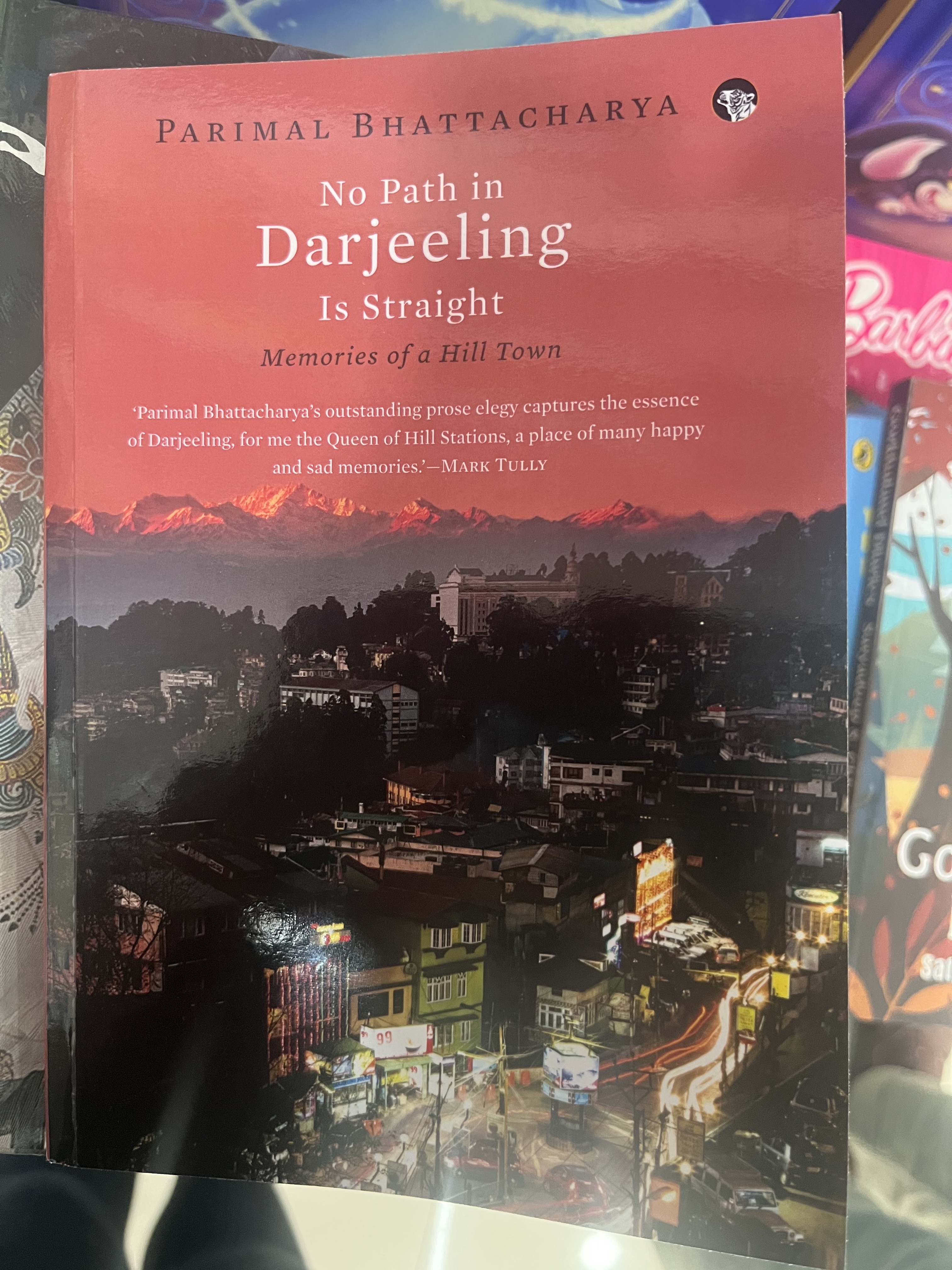 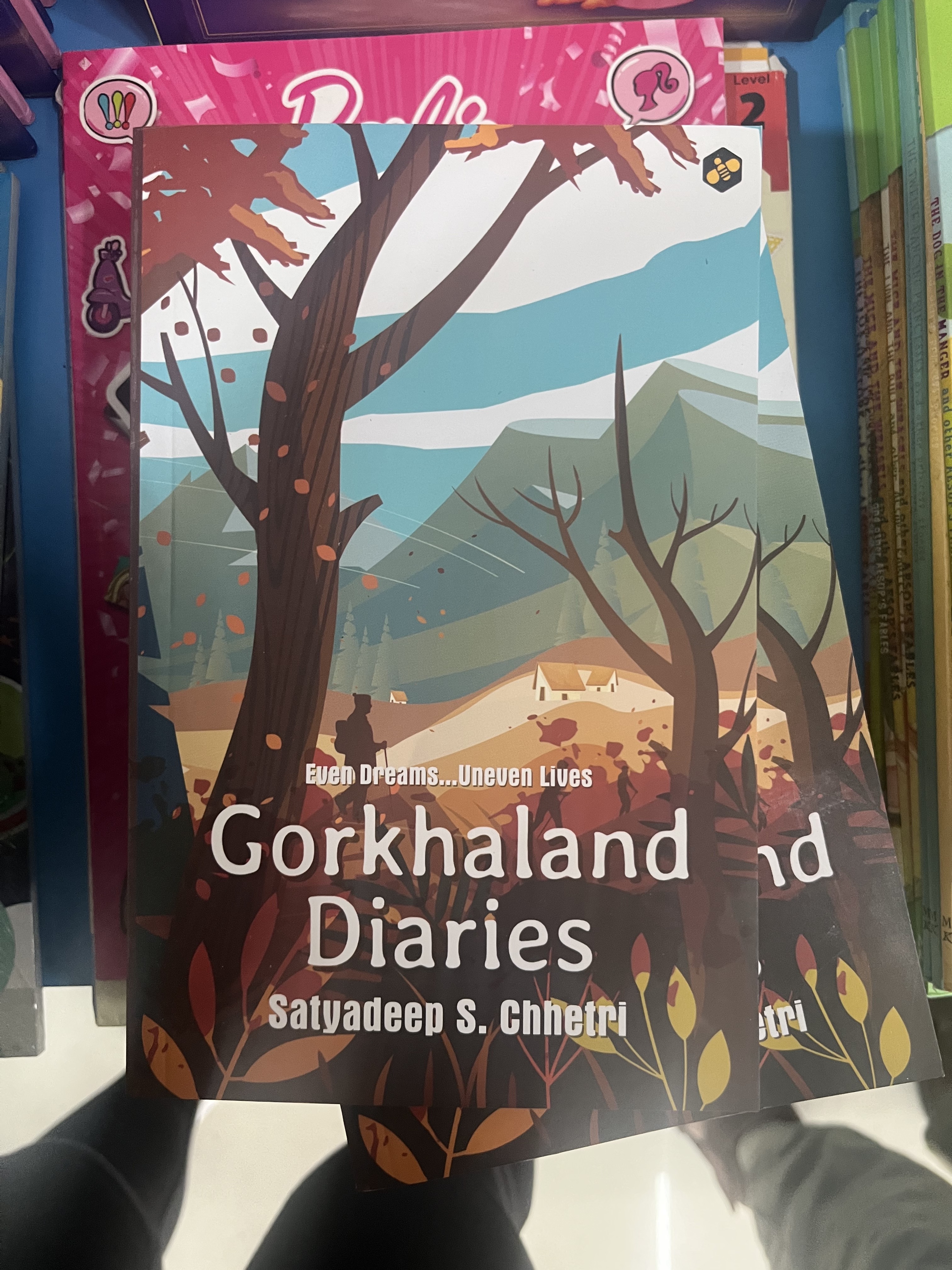 Stepping out of the last bookshop, we were greeted by major hustle-bustle. It turned out that a rally by Mamata Banerjee, the current Chief Minister of West Bengal, was planned for the day we were to leave Darjeeling. There were posters of her everywhere, huge crowds due to people pouring in from other regions, and a huge stage and screens being set up in Chowrasta. The entire city seemed to be mobilised: the air felt electric. I do not know enough about Mamata Banerjee to comment on her politics, but I was heartened to see a woman be taken so seriously in political discussion. I wish we could have stayed for the rally, but unfortunately, the ensuing traffic jam would have jeapordized our chances of leaving Darjeeling that day, and derailed the rest of our itinerary (our plans ended up getting radically transformed later anyway, but that’s a story for another blog post). 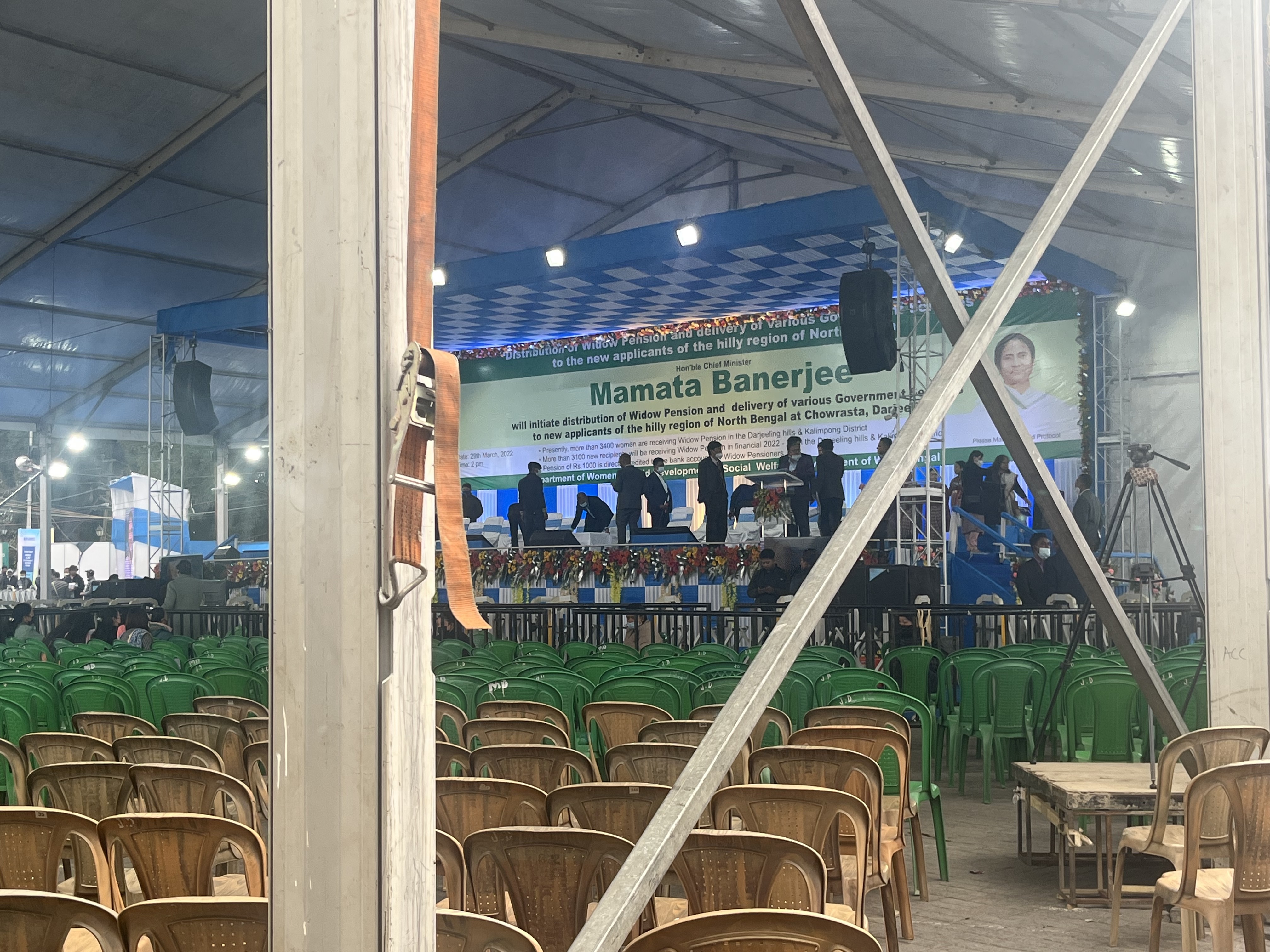 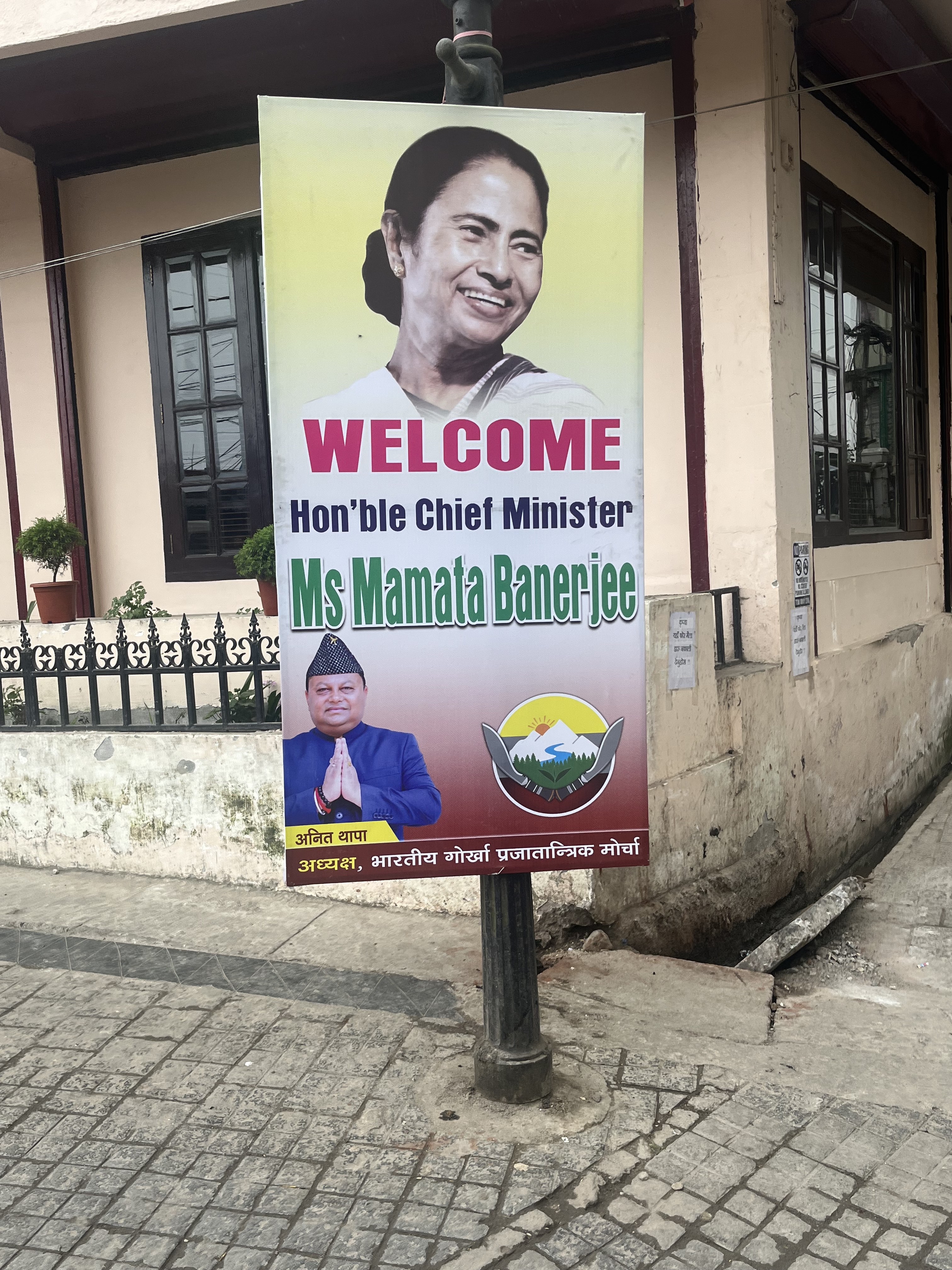 Travel is unpredictable — it twists and turns in ways that you least expect. Darjeeling was meant to be nothing more than a convenient stop on my way to somewhere more exciting: I expected little more than a toy train moving across a hilly backdrop of tea fields. And yet, it has been a highlight of the trip so far.